*A ticket or flyer is needed to confirm this date*

Thanks to @ReneCasis on Twitter for the advert scan.

Photos of Rachel at The Auditorium by Jason Markin: Part one, Part two 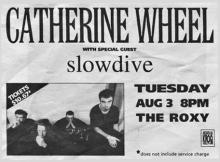 It looks (The Black Cat) too big venue for us. We all groan when we see the size of it. Various people are milling around. The two support bands, Lorelei and Le Bradford are there setting up their equipment. This is supposedly a 500 capacity venue, tho' it looks bigger. Apparently, when it's full it doesn't look it due to fire regulations. We find out Carter are playing at the 9:30 club, and we get our usual paronia trip about no-one turning up. We end up with around 270 people, over twice as many as Carter. It looks respectable enough and the gig goes surprisingly smoothly. First nights are notoriously plagued with mistakes, but tonight we play reasonably well. Steve from Lorelei kindly offers to put us up for the night. Totally amazing house. One hundred acres of land. Unfortunately, it was raining the following morning so we didn't really venture out"

Maxwells. A lot of bands play here (apparently). The stafe is tiny, come to think of it the venue's pretty small too! I meet Sheila, we talk, she hands Plume number 5 to us. Everyone in the band enjoys reading Plume, so it's cool to have the opportunity to write this. The lads play a lot of footie nearlytaking the lights out in the process. Le Bradford support us again and kindly lend Nicky their bass amp. The gig is really hot. We sold it out, HA HA!!! The only access to the stage is through the audience. The dressing room is down some staurs below the restaurant next door in what can only be described as a sweatbox. Visions of the stafe being a sauna come to mind, but surprisingly it's quite cool up there. Gig goes well, we decided against doing an encore due to have to fight thru the audience again. Bloody lazy aren't WE??!!!

After the gig things get quite eventful. Talk to a lot of nice people. I meet a female who noticed my Take That necklace (yeah, yeah come on call me a saddo I don't give a shit). She then shows me a lot of photos of them. She works at tower records and they did an instore there. She writes to Robbie. She gives me photos of Robbie. I'M IN HEAVEN!!!!
She also spots the Ren & Stimpy stickets on my guitar, and she says she has a spare Stimpy doll that talks which she'll bring to New York tomorrow. Some people some damn generous!

On leaving the venue at some unearthly hour, being totally pissed out of my head (that's drunk to you americans!), I find I've lost my glasses. Panic ensues, me & Simon go back in the venue to hunt for them while the van drives round the block. We can't find them, so we go back defeated to the van and lo and behold in the middle of the road are my glasses. Relief. Exciting stuff this touring lark innit? We drive back to Sheri's an crash...

(setlist to be confirmed)

So, Providence. We've never been here before (it's about an hours drive from Boston). The venue is around 500 capacity. Paranoia sets in yet again. I get handed a local free paper ("The Nice Paper"), by an SK person (a couple of them are here and will also come to Boston tomorrow). Quite funny really, we're the cover story. I did the interview over the phone a week before we came out and basically spent the entire time slagging SBK (as you do). The lovely interviewer (a miss Wendy Borges) printed the whole damn lot! Good on her! Give the woman a drink! We went out to a much classier tucker joint tonight. Everything was far more relaxed and friendly. I get back to the venue around ten pm and horror of horrors the venues virtually empty! My worst nightmare! We're not on till midnight, so I just hope that it'll fill up. Two support bands tonight -Difference Engine and Purple Ivy Shadows. By all accounts both bands were good. By the time we go on the venue is looking respectable (around 300). Indeedy the gig goes well, and everyone gets suitable paraletic later on. Neil goes off with Difference Engine for a smoke or two, and the rest of us find a lovely hotel to rest our heads. Bliss!!

The gig was sold out tonight. Really good atmosphere, I think we played everything 100 times faster than we should have done, and Neil was none too impressed by the rest of us, but still a good time was had by all. Bit of a one off with regards to the alcohol intake before the gig. As a rule, well normally anyway everyone is pretty much sober until after the gig is finished. Oh well. It has to happen once in a while!

Splashdown zine: Interview with the band and photos