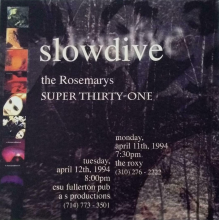 It turns out to be a good evening. The Roxys sold out (Hurrah!). Everyone's in high spirits. I totally missed Super 31 but I caught some of the Rosemarys. What I saw was really good. Their projection show is really cool. A band worth catching if you get the chance. I know they have an LP due for release soon through Twentieth century Fox??!! Rodney from KROQ introduced us this evening which was quite weird but still, the gig went very well. Afterwards carter turned up in the dressing room. We know one of their crew-Mole- from Reading (don't ask me why he's called Mole). That was really fun. We've never met them before, they all seemed really pleasant. I was suitably pissed by the time they appeared, and i kept saying to Fruitbat "what are you doing at fuucckkkiiinnggg ethereal gig then?"
He admitted that he hand't really wanted to come but he was glad he did as he really enjoyed it! HA HA! He then went on to say that Carter had played here around three weeks ago and only got 200 people in (it's a 600 capacity venue), and kept saying "You lot are doing really well over here aren't you?"

We got chucked out of the dressing room by a nice cleaning lady, who, I swear, put bleach everywhere. Good way of getting rid of people! Everyone kind of split up after that. Went off of the viper room (had to be done!). Weird night on monday. There was like this bizarre mixture of people on stage playing sort of really naff country and western songs, and these fat women with cropped tops and shorts, really, really pissed, dancing country style. A truely bizarre experience 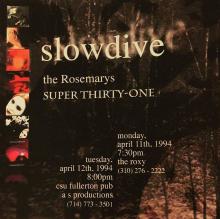 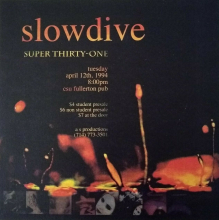 Thanks to Chris Coldiron for the ticket scan.

Audio: Slowdive live at the CSUF Pub in Fullerton, CA on 12 April 1994

Thanks to Dave Huston for the ticket and setlist scan.

Thanks to @SpaceMan_5000 for the ticket scan.

Slowdive, Love by John McIntyre in the bit.listserv.allmusic newsgroup

Thanks to Neil for confirming the support act and to Dave Jones for the ticket scan.

Rachel Goswell of Slowdive photographed in 1994 at Industry in Pontiac, MI.
The Industry