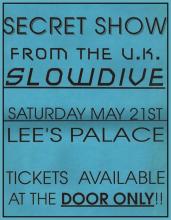 The following night we did our own headline show at a small club called Lee’s Palace. A sold out show (around 600 people). This was excellent fun, Christian took it upon himself to stage dive at the end of the set. There’s a first time for everything! We stayed on for a few days holiday, and on the last night we saw The Beastie Boys! I love ‘em!

21st May 1994, at Lee’s Palace in Toronto, Canada. We’d finished our set and rather uncharacteristically for the time, Christian had put down his guitar, picked up a large union flag that we’d been given (Britpop was at its height back then), held it aloft, and dived (slowly) into the crowd. Although we didn’t know it at the time, that was to be the last live performance of any kind by Slowdive.

Thanks to @therealtylerb for the ticket scan.